Diabetics may soon be able to pass on the traditional finger prick blood test to monitor their glucose levels.

A team from the University of Bath has developed a non-invasive adhesive patch that draws glucose out from fluid between cells across hair follicles that are individually accessed through an array of miniature sensors using a small electric current.

“A non-invasive—that is, needle-less—method to monitor blood sugar has proven a difficult goal to attain,” Richard Guy, a professor from the Department of Pharmacy & Pharmacology, said in a statement. “The closest that has been achieved has required either at least a single-point calibration with a classic ‘finger-stick,’ or the implantation of a pre-calibrated sensor via a single needle insertion. The monitor developed at Bath promises a truly calibration-free approach, an essential contribution in the fight to combat the ever-increasing global incidence of diabetes.”

With the patch, glucose is collected in small reservoirs. Measurements can be taken every 10 to 15 minutes over the course of several hours.

The test is advantageous to other wearable sensors because it can operate on a small area over an individual hair follicle—significantly reducing the inter-skin and intra-skin variability in glucose extraction and increasing the accuracy of the measurements taken so that calibration through a blood sample is not necessary.

“The specific architecture of our array permits calibration-free operation, and it has the further benefit of allowing realization with a variety of materials in combination,” Adelina Ilie, PhD, from the Department of Physics, said in a statement. “We utilized graphene as one of the components as it brings important advantages: specifically, it is strong, conductive, flexible, and potentially low-cost and environmentally friendly.

“In addition, our design can be implemented using high-throughput fabrication techniques like screen printing, which we hope will ultimately support a disposable, widely affordable device.”

Patients with diabetes currently have the ability to use devices known as continuous glucose monitors (CGMs) to keep constant tabs on their blood sugar levels, but these also require embedding a needle underneath the skin. However, a new non-invasive technology is emerging that will allow anyone to monitor blood sugar levels in real time.

Fitbit has invested $6 million in a glucose-monitoring startup called Sano, in what appears to be part of Fitbit’s larger plans to make its fitness devices more valuable for overall health.

The investment was first reported by CNBC earlier today; The Verge independently confirmed the investment.

Sano, founded in 2011, is a San Francisco-based company that has been working on what it describes as a minimally invasive, continuous glucose monitor that you’d wear on your skin like a patch. The product doesn’t appear to have shipped yet, and it’s unclear whether this would be sold directly to consumers, or whether it will require FDA approval. That depends on what kind of claims the company is making about the technology.

Minimally invasive glucose monitoring — which means not drawing blood or monitoring the interstitial fluid just below the skin — is a trend among some of the world’s biggest tech companies. Alphabet company Verily says it’s working on a miniaturized continuous glucose monitor. Apple is said to be working on some type of needle-less blood sugar tracker — though as The Verge’s Rachel Becker has reported, it’s incredibly difficult to accurately test blood sugar without breaking the skin.

In September of last year, Fitbit said that it was partnering with Dexcom, Inc. to bring a continuous glucose-monitoring display to the Fitbit Ionic smartwatch. Fitbit has also said it’s working on a solution for tracking sleep apnea, though again, that may require more advanced technology than Fitbit’s current slate of products offers. 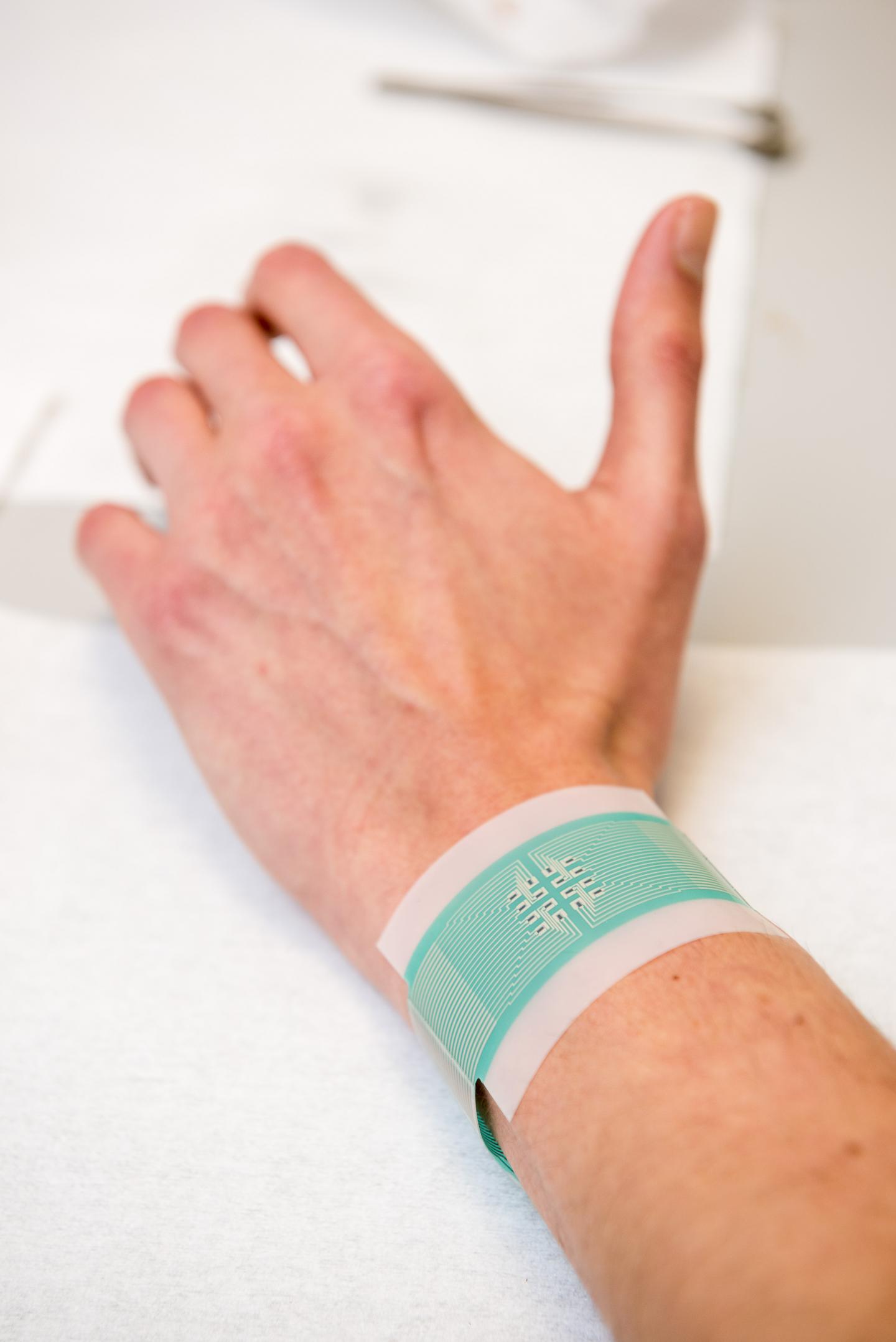 Scientists have created a non-invasive, adhesive patch, which promises the measurement of glucose levels through the skin without a finger-prick blood test, potentially removing the need for millions of diabetics to frequently carry out the painful and unpopular tests.

The patch does not pierce the skin, instead it draws glucose out from fluid between cells across hair follicles, which are individually accessed via an array of miniature sensors using a small electric current. The glucose collects in tiny reservoirs and is measured. Readings can be taken every 10 to 15 minutes over several hours.

Crucially, because of the design of the array of sensors and reservoirs, the patch does not require calibration with a blood sample — meaning that finger prick blood tests are unnecessary.

Having established proof of the concept behind the device in a study published in Nature Nanotechnology, the research team from the University of Bath hopes that it can eventually become a low-cost, wearable sensor that sends regular, clinically relevant glucose measurements to the wearer’s phone or smartwatch wirelessly, alerting them when they may need to take action.

An important advantage of this device over others is that each miniature sensor of the array can operate on a small area over an individual hair follicle – this significantly reduces inter- and intra-skin variability in glucose extraction and increases the accuracy of the measurements taken such that calibration via a blood sample is not required.

The project is a multidisciplinary collaboration between scientists from the Departments of Physics, Pharmacy & Pharmacology, and Chemistry at the University of Bath.

New research suggests that targeting a particular cell signalling pathway with the diabetes drug metformin might offer a way to stop the progression and spread of pancreatic cancer.

The study — which was led by Rutgers Cancer Institute of New Jersey in New Brunswick — is to feature at the 2018 annual meeting of the American Association for Cancer Research, which will be held in Chicago, IL.

This study is not the first to suggest metformin as a potential treatment for pancreatic cancer, but it is the first to show that the underlying mechanism involves the drug’s effect on the Rearranged during Transfection (RET) cell signalling pathway.

Pancreatic cancer is a cancer that starts in the cells of the pancreas, which is an organ behind the stomach that helps with digestion and blood sugar control.

The estimates for the United States suggest that around 55,440 people will find out that they have pancreatic cancer in 2018, and approximately 44,330 people will die of the disease.

Though it is only responsible for 3 percent of all cancers in the U.S., pancreatic cancer accounts for around 7 percent of deaths from cancer.

Because pancreatic cancer is hard to detect in the early stages, most cases are not diagnosed until the disease has started to spread. This makes it harder to treat and often leaves people with much poorer prospects compared with other types of cancer. By Catharine Paddock PhD

How I Cured My Diabetese

GP Dr Michael Mosley was diagnosed with Type 2 diabetes four years ago and rather than start on medication – he invented the 5:2 diet – resulting in him losing weight and reversing his diabetes diagnosis. Dr Mosley will be telling us how you can do the same on a similar diet – watch this short video!